Customers engage Syntec Optics to conduct optical design development of IR electro optics (LWIR lenses). An example is a request for the following specification: 25 mm EFL, f/1, and a FOV. The camera chip size is 640×512 with 17 μm pixels so the diagonal is 13.93 mm, which yields a nominal FOV of ±15.57°. The other requests for the design investigation include correction for wavelengths between 8-12 μm and the material selection is intended to be ZnS, Ge, or Chalcogenide. Syntec can work with a variety of requests based on custom optics applications. The Refractive index of Ge is 4, ZnS is 2.2, and Chalcogenide is 2-3.

Since a single precision optical element often does not provide correction over the FOV, an additional element is often added. Below is a summary of the progressive design improvements Syntec conducts. Note that the second element also has aspheric surfaces up to 6th order on both surfaces. Given the 17 μm pixel size, the design is close to being acceptable from a nominal imaging performance, although it is a marginal solution when the loss in as-built performance is considered. In addition, there are steep incident angles on the second element, which make IR electro optics assembly more sensitive and the performance will degrade in the as-built system. The image plane incident angles are also steep and that will result in intensity drop across the FOV. An MTF plot was added to the summary to illustrate the nominal imaging performance. The solution satisfies all first-order properties of the infrared optics. 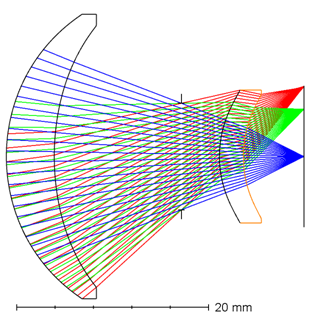 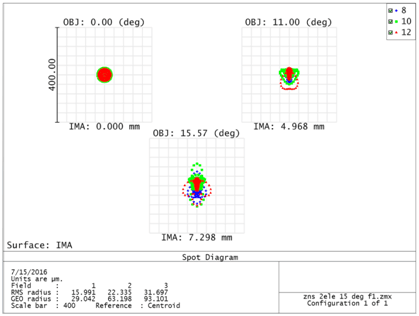 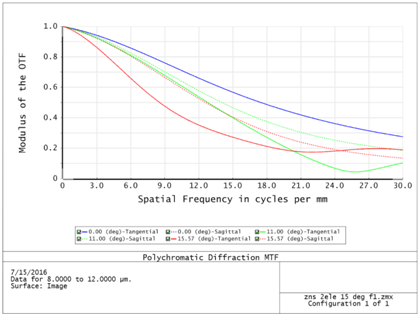