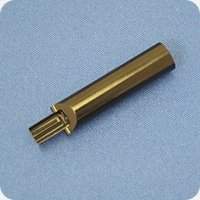 Laser sights are devices that aid aiming, that give the user an aimpoint in the form of an illuminated red dot. A standard design uses a red light-emitting diode (LED) at the focus of collimating optics which generates a dot style illuminated reticle that stays in alignment with the weapon. Laser sights play an important role in applications such as target shooting, hunting and in police and military applications. Apart from firearm applications, laser sights are also used on cameras and telescopes. Syntec Optics manufactures laser optics components for laser sights.

With a long history of providing top quality and delivery of intricate parts, Wordingham Technologies was contacted by a client to make a safer and accurate laser sight component. The challenge on this laser optics part was to come up with a way to fixture and mill the large cutout, while still maintaining the tightly toleranced GD&T callouts.